The Detroit Lions (7-8) were dealt a crushing blow to their playoff hopes after allowing 570 yards of offense (320 rushing) against the Panthers last week in a 37-23 loss that was never really close.

The Lions are still alive, but they need help. They first need to complete the sweep of the Chicago Bears (3-12), who have not won since Week 7 in New England. Giving up 320 rushing yards and then going to face Justin Fields is a daunting task, but we did see the Bills hold Chicago to just 80 rushing yards last week.

When these teams met in Week 10, the Bears blew a 24-10 lead in the fourth quarter after Fields threw a pick-six and was unable to move the offense late after the Lions took a 31-30 lead. But this game will be in the dome where Jared Goff has been very comfortable this year, and the Chicago defense is nowhere close to the standard we are used to seeing from this franchise.

The NFL Week 17 odds have the Lions as a 6-point home favorite with a total of 52 points, which could make this the shootout of the week with teams ranked 31st and 32nd in points allowed.

Players to watch in the Bears vs. Lions game

Khalil Herbert: Everyone knows about Fields’ rushing and David Montgomery at running back, but Khalil Herbert was the breakout star in this offense this year, similar to Tony Pollard in Dallas. Herbert was averaging 5.95 yards per carry before he was injured in Week 10 against Detroit. He made his return last week against a tough Buffalo defense and was ineffective with 6 carries for 7 yards. Maybe he wasn’t ready to come back yet, but we will see what he can do in his second game against a Lions defense that allowed two 100-yard rushers a week ago.

DJ Chark: Since he was injured early in 2021 and stuck in Jacksonville for years, people forget Chark was a second-round pick and 1,000-yard Pro Bowl receiver in 2019. In his first year with the Lions, he is really coming on strong with 79.5 yards per game over his last four outings. He is averaging a career-best 9.8 yards per target this season and looks like a capable No. 2 behind Amon-Ra St. Brown. 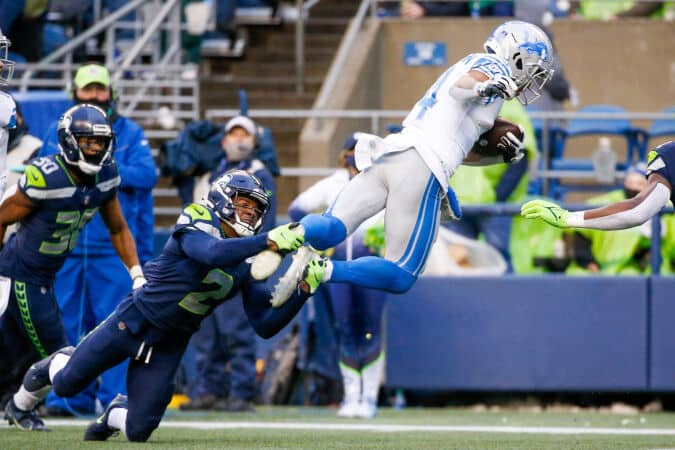 Our Best NFL Bets for the Bears vs. Lions game

We have two NFL Week 17 predictions for this NFC North rematch.

The Bears vs. Lions spread opened with the Lions as a 6.5-point home favorite before moving down half a point going into the weekend.

While the Bears certainly have an argument that they should have won the last meeting before blowing it in the fourth quarter, this team has not played well down the stretch since No. 1 receiver Darnell Mooney was injured for the season. Chase Claypool also has been injured and unable to contribute much in the offense, which still relies way too much on the running game.

But after losing a lot of high-scoring close games, the Bears have not surpassed 20 points in four straight games. Three of the last four losses have been by multiple possessions too.

While Carolina ran wild on Detroit last week, Sam Darnold also had a very efficient passing game the likes of which we have not really seen from Fields this year. It is not even possible with this current lineup of receivers.

Last week was bad, but let’s trust Dan Campbell to rally the troops and get the Lions on track with a cover and win for your NFL bet of the week.

Be sure to read our NFL picks page for more betting tips.

The Lions have seven games this season with over 30 points scored, and five times at home they have gone over 33.5 points. Detroit has scored at least 25 points in every home game except for the 15-6 win over Green Bay.

Detroit knows how to put on a show at home this year, and Goff is very comfortable at throwing more passes indoors than he is on the road. He averages 277.1 passing yards per game at home this year compared to 248.9 on the road, and that difference was much more lopsided until a week ago when he had to play catch up in Carolina.

But the Lions have plenty of options to score with, and they have already dropped 31 points on this Chicago team on the road earlier this year. Again, the Bears have allowed the second-most points in the NFL this year. It is a far cry from the defensive efforts of the Matt Nagy era, let alone past Chicago seasons.

Trust the Lions to play well in their final home game of the season and score 30 points to hit this over.

Frequently asked questions about the Bears vs. Lions game in Week 17

The game is being played at Ford Field in Detroit, Michigan.

In what has been a down year for quarterbacks, Jared Goff is still doing an impressive job in leading the No. 5 scoring offense while ranking No. 6 in QBR (61.8) going into Week 17. Goff has never ranked higher than No. 10 in QBR in any season before.

The Bears are now 1-9 this season in games when having possession of the ball in the fourth quarter and trailing by 1-to-8 points. That is two more losses in that situation than any other team in the league. Justin Fields is 1-11 (.083) at fourth-quarter comeback opportunities in his career, the worst record among active starters. That includes a loss against Detroit in Week 10.