Since the Chargers beat the Raiders 24-19 in Week 1, many of the pieces on both teams have changed, but the overwhelming sense of disappointment is still there as neither has proved to be a real challenger to the Chiefs.

The Chargers have lost several key starters to injury, including Joey Bosa, J.C. Jackson, and Mike Williams. The Raiders got next to nothing out of Hunter Renfrow and Darren Waller this season while blowing three 17-plus point leads, but at least Davante Adams is producing and Josh Jacobs has been a sensation.

Jacobs had 303 yards from scrimmage in Seattle last week, including 229 on the ground as he won the game in overtime with an 86-yard touchdown. It was the third time this season that Jacobs set his career high in rushing in a game. Now he gets to take on a Chargers defense that ranks dead last in yards per carry allowed.

The Raiders’ ability to be balanced on offense should give them an edge in this game as the Chargers will have to rely on Justin Herbert’s heroics in what has been something short of the MVP year we hoped to see from him. You know it’s going to come down to the fourth quarter as most games do for these teams, but the Raiders are the smart bet at home as they avoid the sweep.

We are ready to admit just before Thanksgiving that our preseason pick of the Chargers to win the AFC West was a mistake, and the Chiefs still own this division. Kansas City should win the division for a seventh year in a row, only the third team to do so in NFL history. They can join the 1973-79 Rams (seven) and 2009-2019 Patriots (11) as the only teams to win at least seven straight division titles.

The offense is still so potent without Tyreek Hill, because Patrick Mahomes and Travis Kelce really are that good with Andy Reid’s offense. The Chargers have been too injured (again) and blew a fourth-quarter lead in both games against the Chiefs, or else this race could look entirely different right now.

As for the Raiders and Broncos, ouch. We really goofed when we said this would be an all-time great division race. If there was an argument for firing two first-year coaches during the season, Josh McDaniels (Raiders) and Nathaniel Hackett (Broncos) would have those arguments. 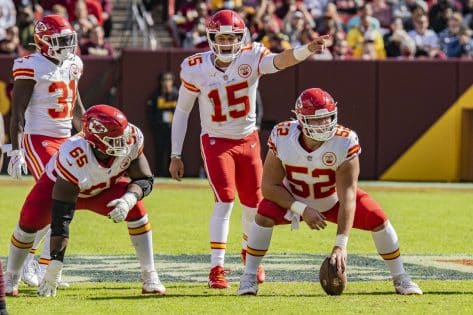 The Current State of the AFC West

How are the AFC West teams shaping up as we head into Week 13?

If Week 6 against Buffalo was the Game of the Year for the Chiefs, then Week 13 in Cincinnati is the encore and the best playoff prep the team will see the rest of this regular season. The Chiefs failed their Buffalo test, and now they get a Cincinnati team that came back from deficits of 14 and 18 points to beat them last year. We’ll finally see if the Chiefs have answers for Cincinnati’s three-man rush that led to the worst half of Patrick Mahomes’ career in the AFC Championship Game. The Bengals are also expected to get Ja’Marr Chase back for this one, so it will be quite the showdown on Sunday. It could be the last real test standing between the Chiefs and the No. 1 seed, and between Mahomes and the MVP award.

The Chargers did a great job to pull off a game-winning drive in Arizona, complete with a two-point conversion with 15 seconds left to win 25-24. The team continues to thrive on late-game magic from Justin Herbert, but things are not getting any easier with the injuries and schedule. The Chargers can still realistically get to 10 wins and miss the playoffs because of the state of the AFC, so they do not have a big margin for error and cannot afford to slip up in a division game like the one in Las Vegas this week. But we know nothing will be an easy game for this team.

How much worse can it get for Russell Wilson and the Broncos? They just lost their first game of the season that wasn’t within one score in the fourth quarter, and it was a 23-10 loss to lowly Carolina with Sam Darnold at quarterback. Denver is 3-8 and averaging 14.3 points per game. You have to go back to 1966 to find the last season where Denver scored so few points in the first 11 games of a season. Things are so bad that NBC has flexed the Week 14 Sunday night game with Kansas City out of prime time, denying the nation a chance to see the first Wilson vs. Mahomes matchup in the division. Imagine telling someone in August that would happen this year. That’s how bad this has gone.

Remember when we titled this section “Close Game Regression” before Week 1 and pointed out the Raiders were 4-0 in overtime games last year? Well, they kept blowing every close game this year, but things have started to turn around with back-to-back overtime wins over the Broncos and Seahawks. Josh Jacobs was incredible in Seattle with 303 yards from scrimmage and the game-winning touchdown in overtime. The Raiders still have a shot to get a respectable record that will save Josh McDaniels’ job for sure. But this team is going to stew over the blown leads in the first half of the season. It should have been a better year.

The 2022-23 NFL season could go down as the greatest division race ever in the AFC West given the strength of all four teams. Let’s take a look at the history and key facts for this division.

Which Teams Play in the AFC West?

While many NFL divisions have gone through significant changes over the years, the core of the AFC West has remained the most consistent. The four teams currently in the division are the Denver Broncos, Kansas City Chiefs, Las Vegas Raiders, and Los Angeles Chargers.

History of the AFC West

Believe it or not, the four AFC West teams have shared a division with each other every year since 1960, making for some of the longest rivalries in the history of professional football.

All four teams originated in the inaugural 1960 season of the American Football League, or AFL. The Chiefs were known as the Dallas Texans before moving to Kansas City in the 1963 season. But the AFL was a rival league to the NFL that existed for 10 seasons from 1960 to 1969 before the two leagues merged in 1970. The 1969 Chiefs were the last team to win the Super Bowl, against the Minnesota Vikings in Super Bowl IV, before the leagues merged.

After the 1970 merger, the NFL switched from a league with four divisions to a league with two conferences and three divisions in each for a total of six divisions. The 1970 AFC West had the same four teams the AFC West has today with the Raiders, Chiefs, Broncos, and Chargers.

Fun fact: The 1970 AFC West is the only division in NFL history where three teams finished with multiple ties: Raiders (8-4-2), Chiefs (7-5-2), and Chargers (5-6-3). Even the Broncos were 5-8-1 that year after tying a game with the Chargers. In 1973, all four AFC West teams had at least one tie again, the last time in NFL history that has happened for a division. At the time, the NFL did not play overtime sessions in regular-season games. Overtime was added to the regular season in 1974 to avoid having so many ties, which we should probably thank the old AFC West for.

Another thing most people do not know about the AFC West is that the 1976 Buccaneers played in it during their expansion season when they finished 0-14. The Seahawks, also an expansion team in 1976, then swapped places as designed with Tampa Bay to join the AFC West in 1977. They played in the division through the 2001 season before joining the NFC West in the 2002 realignment.

But of the eight divisions currently in the NFL, the AFC West is the only one where all four teams have shared a division with each other every year since 1960.

Who Has Won the AFC West the Most?

While recent history has been cut and dry, throughout time, the AFC West has been very competitive with the teams almost holding an even share of the division titles:

*The Raiders had the best record in the AFC West in 1982 too, but the NFL ignored division finishes that year in what was a nine-game season shortened by strike. The Raiders unofficially have finished first 16 times in the West.

The Seahawks also won the division twice when they used to be in it in 1988 and 1999. But the Chiefs can tie their rivals at 15 division titles this season.

Recent history since 2002 realignment paints a different picture in the AFC West standings:

Who Has the Most Super Bowl Success in the AFC West?

Every AFC West team has been to the Super Bowl, but their level of success is vastly different.

Prior to the Super Bowl era, the Chiefs (then known as Dallas Texans) won the AFL Championship in 1962. The Chargers were AFL champions in 1963, the only championship in franchise history.

If you read our AFC North predictions, you know that division has a rich history of playing hard-nosed football. But it could be argued that of the eight divisions in the NFL, the AFC West has been blessed with the best quarterback play throughout history. Some of the notable passers include:

This makes it fitting that Russell Wilson is joining the Broncos, loading up the AFC West with Mahomes, Wilson, Justin Herbert, and Derek Carr – one of the best divisions of quarterbacks in NFL history.

This should make for an exciting season and difficult AFC West predictions as these teams battle all season long.