The NFC West is on the line as the Seattle Seahawks (7-6) host the San Francisco 49ers (9-4) on Thursday Night Football. A win and the 49ers are division champs, simple as that. The teams met back in Week 2, which was the game where Trey Lance suffered a season-ending injury (broken ankle), changing the prospects for the 49ers this season.

But even after losing Jimmy Garoppolo to a broken foot, the team is still in good shape with rookie quarterback Brock Purdy, who just won his first start over Tom Brady and the Buccaneers by a 35-7 final. The 49ers were up 35-0 in the third quarter, but even Kyle Shanahan couldn’t find a way to blow that lead against Brady.

Purdy is a bit banged up (oblique/rib) right now, but he hasn’t been ruled out of this game. If he cannot go, then newly signed Josh Johnson should get the start. He passed for over 300 yards in games with the Jets and Ravens last year, and he has been in San Francisco multiple times over the years. Even if Johnson was the quarterback, the 49ers would probably still be favored.

You won’t see Deebo Samuel in this one after he was carted off with an MCL and ankle injury. But the team is eyeing to get him back by Week 17 or just before the playoffs. The 49ers still can rely on that No. 1 defense that did not surrender a single point to this Seattle offense back in Week 2. Seattle’s only points in the 27-7 loss came on a blocked field goal return for a touchdown, so that could have been a 30-0 game too.

Players to watch in the 49ers vs. Seahawks game

George Kittle: We tend to forget about Kittle since he is averaging 45.5 yards per game, his lowest since his 2017 rookie season. But he is still one of the best tight ends in the game and a weapon the team can choose to unleash with Samuel out. Kittle had 84 yards and two touchdowns in the team’s last division matchup against Arizona in Week 11. He missed the first Seattle matchup in Week 2, but he destroyed this defense in his last matchup with 181 yards and two touchdowns in 2021. He is someone to keep in mind for this game.

Kenneth Walker: The rookie has been upgraded to questionable, so it is still not a given he even plays in this game. But the Seahawks could use him to take some heat off Geno Smith as a one-dimensional attack against this defense is bad news. Still, don’t expect much from Walker even if he plays. The 49ers have the top-ranked run defense and already shut the Seahawks down in Week 2. Walker wasn’t a starter yet but had a season-low 10 yards on 4 carries that day. 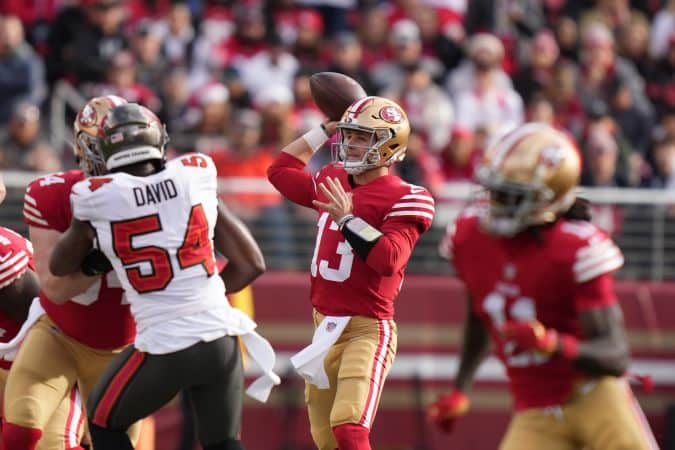 Our Best NFL Bets for the 49ers vs. Seahawks game

We have two NFL Week 15 predictions for the 49ers trying to complete the sweep and win the division title.

The 49ers vs. Seahawks spread opened with the Seahawks as a 1.5-point home underdog. The line has moved further in San Francisco’s direction to 3.5 points.

These are two very different offenses right now, and it is a bad matchup for the Seahawks.

The 49ers have the balance to pass efficiently and run very effectively. Brock Purdy had the highest QBR among all quarterbacks in Week 14 in his first start, and Christian McCaffrey, who was in Carolina when these teams met in Week 2, had a season-high in rushing yards last week. The Seattle run defense is one of the worst in the league too.

The Seahawks are basically a pass-heavy offense with two excellent wide receivers and not much else. The running game was working out with Kenneth Walker in the starting lineup, but things started going sour there in Munich against Tampa Bay, and now Walker is hurt. He may play, but the 49ers have not allowed a 60-yard rusher all season.

So, it is hard to see how this game is not very lopsided in the rushing department. The Seahawks are 1-6 with every loss by more than three points when outrushed by at least 60 yards this season. San Francisco was already a season-best plus-153 yards on the ground in Week 2 against Seattle.

That 27-7 win by San Francisco in Week 2 was the first time in the last 23 meetings that the Seahawks lost by more than seven points to the 49ers. Things should be closer this time but trust the 49ers to come through and get this cover to claim the NFC West title for your NFL bet of the week.

Metcalf started his career strong against the 49ers with at least 70 yards and three touchdowns in his first three matchups with the division rival. But in the last four meetings, he has failed to surpass 65 receiving yards.

When the teams met in Week 2, Metcalf was held to 35 yards on four catches. He has been bothered by a hip injury as of late, but he did have 71 yards and a touchdown on Sunday against Carolina.

However, Metcalf has only gone over 65.5 yards in 6-of-13 games this year. That is at least much better than the 2021 season when he went over 65.5 yards in 3-of-17 games, but Metcalf is no longer on track to be an elite receiver like he was earlier in his career.

In fact, Tyler Lockett continues to be the more reliable option in Seattle. Lockett has 27 more yards on 11 fewer targets than Metcalf this year. He went over 100 yards against the 49ers in Week 2 despite the offense not scoring a point. Fade Metcalf in this rematch.

Frequently asked questions about the 49ers vs. Seahawks game in Week 15

The game is being played at Lumen Field in Seattle, Washington.