We break down each of FFXIV’s four tanking jobs: PLD, WAR, DRK and GNB.

So, you want to be the shield of the party? Stepping up to the Tanking Job Role in FFXIV is a whole lot of fun, with four unique Jobs to choose from there is a style for any kind of front-line fighter.

We take you through each Tank Job, explain what makes them unique and offer some basic tips to maximize your effectiveness and enjoyability for each Job.

Your traditional sword and board fighters, Paladin’s can make an excellent introduction to tanking thanks to their wide array of heals and damage mitigation. Of all the Tank jobs, Paladin’s offer the most utility to the player – making them a solid choice for off-tank. Their damage mitigation extends to fellow party members, and they can also throw out an instant-cast heal on themselves or someone else if things are starting to look a bit hairy for the healers.

Once you hit level 30 and have completed all the GLD class quests, you can take the "Paladin's Pledge" Quest to receive your PLD job stone. Find it in Ul'dah at the Steps of Thal (x:9, y:11).

For a full guide to the PLD Job check out SaltedXIV. If you’re looking for a tanking role that packs plenty of damage without sacrificing crowd control, Warrior is a good fit. With plenty of self-heals up their sleeves, they’re perfect if you prefer a fast, aggressive style of tanking. Although while it’s easy to pick up the Great Axe, Warrior is a difficult tanking class to master with their build/spend resource rotation that relies on you choosing a finisher which will either buff your damage or heal you.

The Warrior class quest, “Pride and Duty (Will Take You…)” unlocks once you’ve completed the MRD quest line and reached level 30. You can pick it up at Limsa Lominsa on the Upper Decks (x:11, y:6).

For a full guide to the WAR Job check out SaltedXIV. Added in the Heavensward expansion, Dark Knights are an interesting albeit niche addition to the tanking roles. They boast one of the most powerful damage mitigations in the game, however unlike WAR and PLD their self-healing abilities leave a little to be desired. Living Dead does provide staying power in a pinch, but it also requires your healer to be ready to boost you back up to full, making it a little less useful. However, the DRK’s Job quest lines are some of the most enjoyable in the game, and this alone make it worth picking up.

For a full guide to the DRK Job check out SaltedXIV. The newest Tank Job, Gunbreaker, dropped with Shadowbringers, and almost leans toward DPS with it’s playstyle. Highly focused on offense, the GNB lacks a lot when it comes to health-sustain and will rely more heavily on the healers in the party. (And Superbolide will certainly keep them on their toes!) That said, they pack a massive punch with a range of defensive moves that will help keep you on your feet. Despite the lack of big self-heals, GNB is still a well-rounded choice in the tanking role.

Before you can grab yourself a gunblade, you’ll need to have reached level 60 with any DoW or DoM class. Once you’ve ticked that box, you’ll find “The Makings of a Gunbreaker” in New Gridania (x:11, y:11).

For a full guide to the GNB Job check out SaltedXIV. FFXIV: Everything You Need To Know About Blue Mage 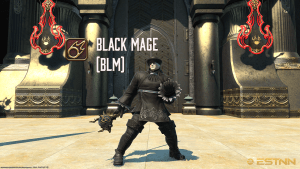 FFXIV Job Roles: Play 1 or Play Them All!