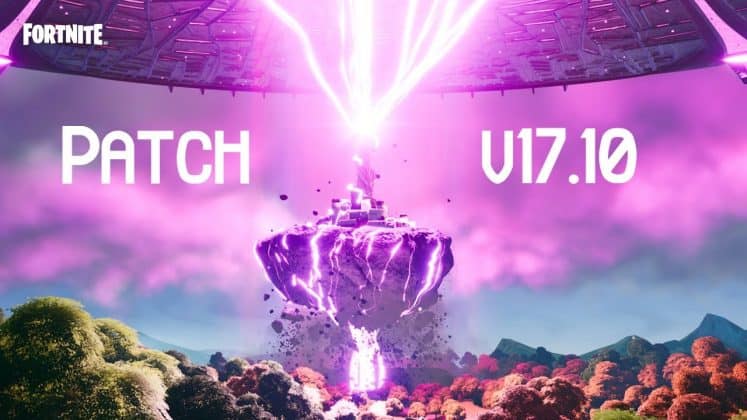 The first patch of Fortnite Chapter 2 - Season 7 has arrived. It’s a huge one that includes new areas to explore, weapons to try and more. Epic Games came out of the gate firing on all cylinders, making Season 7 a more memorable experience than anyone could anticipate. There’s a lot to recap in the wake of patch v17.10, so let’s highlight the most crucial details as you continue your extraterrestrial journey in Fortnite Battle Royale.

A new surprise descends. A way inside the Mothership? 🛸

Fortnite v17.10 is scheduled for release on June 22. In preparation for the update, services will be disabled starting at approx. 03:30 AM ET (07:30 UTC). pic.twitter.com/zrJ4j8mrrU

Four new items/weapons materialized in patch v17.10. These include a Mythic Ray Gun, Inflate-A-Bull, Alien Knockgun Launcher and Alien Nanites, and each offers a unique property.

Here are the descriptions of all new items:

Inflate-A-Bull: A suit that gives you cow-like properties, such as being able to roll down hills, bounce off cliffs, and be impervious to fire. You know, normal cow stuff.

Alien Nanites: Generates an Alien Biome in a large area for a short duration

It’s also worth noting that Epic has increased the Recon Scanner’s recharge time and bolts will be active for a smaller duration of time. Additionally, they have reduced the Flying Saucer’s rate of fire.

The inside of the mothership! (via @ximton)

There more inside it btw! pic.twitter.com/EWvcqLRmC0

Epic teased an eventual opportunity for players to enter the Alien Mothership overhead. That has come to fruition in patch v17.10. Access to the Mothership can be gained through new UFOs named “Abductors” which will transport players into the Mothership. Once inside, HYPEX states you can find “abducted” locations such as the Butter Barn and Lucky Landing.

Alien Parasites text has been updated, they'll probably release this or next week!

- An Alien Parasite has attached to you! Enjoy enhanced mobility in exchange for some health!
- Alien Parasites detach and ignore you for a few seconds if you touch fire, water, or enter a prop

The recently revealed “Alien Parasites” will appear in the latest update. These new NPCs attach themselves to players and offer mobility in exchange for health. To remove them, you must touch water, fire or enter a prop. Here’s an excerpt from Epic’s description:

“Known simply as Parasites, if one of these mini-Aliens attach to your head, they’ll drain your Health down to 60. (Shield remains unaffected.) But this relationship is more give-and-take than it seems. Not only do they protect you from headshot damage, but they also make you run faster and jump higher.”

Parasites will attack animals such as chickens, wolves and boars. Eliminating an animal will cause the parasite to jump on that player.

Here are all of the bugs addressed in patch v17.10:

That covers everything new in the latest Fortnite Season 7 update. Epic pulled out all of the stops on this one, so be sure to jump in the game and experience it for yourself!