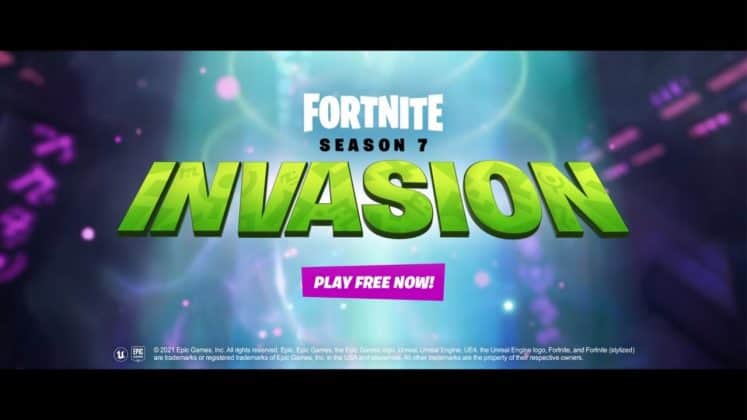 The weeks of anticipation ahead of Fortnite Chapter 2 – Season 7 have finally paid off. After a Primal-themed stint, Fortnite shifted to an entirely new direction. Epic Games began rolling out teasers and cryptic hints in late May. Recent weeks have produced in-game crop circles, an alternate reality game (ARG), alien abductions and intriguing futuristic items.

The wait is over, and ESTNN has you covered with all of the new features, weapons and overall changes in Chapter 2 – Season 7. Without any further ado, let’s see what the “Invasion” era of Fortnite has in store for the fandom.

Chapter 2 – Season 7, like all others before it, reshaped the loot pool. Epic Games brought all new weapons to the fold, including alien-themed ones such as a Recon Scanner, Kymera Ray Gun, Pulse Rifle and Rail Gun. Additionally, the new crafting material this season is Nuts and Bolts.

Some previous weapons and items have returned, like the Lever Action Shotgun, Launch Pad, Bolt Action Sniper and Hand Cannon. It’s also worth mentioned here that Supply Chests have returned also. Here is the complete list of Vaulted, Unvaulted and brand new items.

The Spire is no more after the Alien Mothership abducted it and the Zero Point, causing further chaos in Fortnite’s present landscape. In its wake, there are two new named POIs, but neither is entirely different. Sweaty Sands is now Believer Beach, and Colossal Crops is now Corny Complex. For some reason, Stealthy Stronghold no longer appears as a named point of interest. Boney Burbs, Catty Corner and all other Chapter 2 locations remain a staple in Chapter 2 – Season 7.

Fortnite commentator AussieAntics pointed out an excerpt from the launch description, indicating map changes throughout the season. Players can expect some differences over the next few months.

The Mothership above the map will abduct you, take you there to loot henchmen chests for 15 seconds and it'll throw you back to the map!

HYPEX detailed a new mechanic in Season 7, where an Alien Mothership abducts players and allows them to loot several supply chests while on board. Abductees have 15 seconds to build their ideal loadouts before returning to the map. It’s not clear at this point how, where and when players can trigger this in-game event.

Llamas are now alive and they run around the map!

First revealed by HYPEX, Loot Llamas will now run around the map in Season 7 instead of spawning and remaining stationary. When shot at, the feeling Loot Llamas will drop loot and have a chance to teleport closer to you.

Drivable UFOs around the map:

HYPEX also informed that driveable UFOs are available in Season 7. These new vehicles have a 100% spawn rate, allowing players to reboot their teammates and inflict damage to enemies and their structures. If true, this is a massive game-changer that could take some of the emphasis off of the beloved Reboot Van.

Here's how to get rid of Alien Parasites that stick to you: "Detach and ignore you for a few seconds if you touch fire, water, or enter a prop"

Also other text related to them: "An Alien Parasite has attached to you! Enjoy enhanced mobility in exchange for some health!"

Alien Parasites are another new addition, per HYPEX. These critters will stick to players’ heads and take 40 health but grant them the ability to run faster and jump higher. Getting rid of the parasite tasks players with touching fire, water or becoming a prop.

Infos about the Cosmic Chest!

– Take turns smashing weak spots to open the Cosmic Chest
– The Cosmic Chest activates when the entire squad is nearby
– A teammate just found a Cosmic Chest! They need your help to open it! pic.twitter.com/r4qtOSpTSc

We recently outlined that Supply Chests have returned this season, but another loot box has also come to light per HYPEX. Cosmic Chests have never appeared before in Fortnite and require teams to coordinate smashing weak spots to unlock them. These presumably afford top-tier loot but might only be available in duos, trios and squads.

In Season 7, we're adding the ability to cancel your Shakedown of an opponent.

Hitting Reload or the same button/key you used to pick the opponent up will immediately drop them mid-shake, cancelling any accidental interrogations.

After much campaigning from the community, Epic Games has added an option to cancel the “shakedown” mechanic. Refer to our recent article to learn more on how to perform the action.

Here are all of the bugs addressed in patch v17.00:

Fortnite Chapter 2 – Season 7 will end on September 12, so players can expect some summer-themed events, given Epic Games’ track record since 2017.

Stay tuned to ESTNN for more updates throughout the next few hours and days!