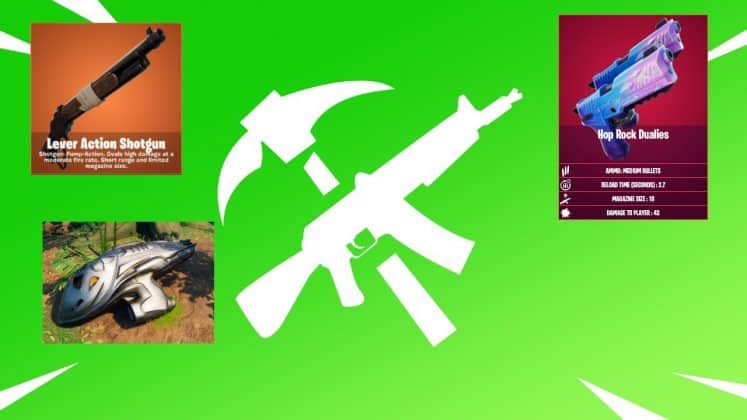 Learn everything you need to know about Fortnite: Battle Royale patch 15.20.

It's felt like an eternity since Epic Games last updated Fortnite: Battle Royale. In fact, over a month has passed since the release of Chapter 2 – Season 5 update 15.10. No major updates dropped since then, but the developers are back after the holiday break with some new content. To be precise, the team behind Fortnite introduced a new Lever Action Shotgun, Exotic Dual Pistols, added a real “Disable Pre-Edit” option, and teased some upcoming collaborations. Let's dive deep into Patch v15.20 and see what Epic has in store for Fortnite players.

This update's most significant portion is the inclusion of a brand new shotgun to Fortnite's arsenal of weapons. The Lever Action Shotgun joins the Tactical and Charge variants in the Season 5 loot pool. Some may remember the Lever Action Sniper Rifle introduced before Operation Snowdown, but this is different. The Lever Action Shotgun appears in all variants with a max magazine size of six, differing reload times and up to 12.7 damage with its Legendary rarity. It is available in casual playlist loot pools and Arena via NPC purchase.

A new Exotic weapon known as the Hop Rock Dualies is now purchasable in-game. Epic Games' creator patch notes indicated that players who possess this weapon can “shred through the enemy in dual-wielding, bouncing style.” This means there is a zero-gravity component to the pistols. Players can purchase this Exotic from “Cole,” who either spawns in Retail Row or Shipwreck Cove.

The Predators Crash spot can be seen over at the Stealthy Stronghold. pic.twitter.com/fgEvAm1RSh

Predator teasers have been swirling the internet since Epic Games introduced Stealthy Stronghold in Season 5. The new POI, located north, gives off jungle vibes similar to that of the hit 1980s movie “Predator,” starring Arnold Schwarzenegger. It's a classic film, but a mind-boggling collaboration with Fortnite if the rumors hold firm. “The forest is moving… something's out there!” Several players have confirmed that Predator's ship crash-landed at Stealthy Stronghold, and a list of challenges leaked.

Additionally, the patch notes referenced Agent Jonesy “bringing in a few big guns with the next pair of Hunter…” Although it's unclear what the next crossover is beyond possibly Predator, Epic is looking to add more characters on top of Kratos, Master Chief, Michonne and Daryl Dixon.

Fortnite's competitive and casual scenes collectively groaned when Epic Games made the wrong adjustment to the pre-edit option. Instead of offering a setting to disable the feature, Epic granted players the ability to reset pre-edits when exiting build mode. Although helpful, the developers missed the mark and thus promised to rectify the issue. The Fortnite overlords answered the prayers of players everywhere. A “Disable Pre-Edit” option is now available in the settings menu.

Fortnite leaker HYPEX revealed three new cosmetics that will be available shortly. He also confirmed that the Travis Scott set should reappear in the shop soon. The Fortnite leaker decoded a traversal soccer emote from the game files.

Here is the entire list of bug fixes implemented in update 15.20, which ignored the fixed sand tunneling mechanic. It's worth noting that Epic Games decreased the music volume accompanying IO Guards and increased the chance of them dropping heals.

“Anonymous Mode,” which helps combat stream snipers, is now only available in public matches. Players in tournaments cannot use that feature anymore.

That covers all of the changes thus far in patch 15.20. If anything else changes, ESTNN will update you here.