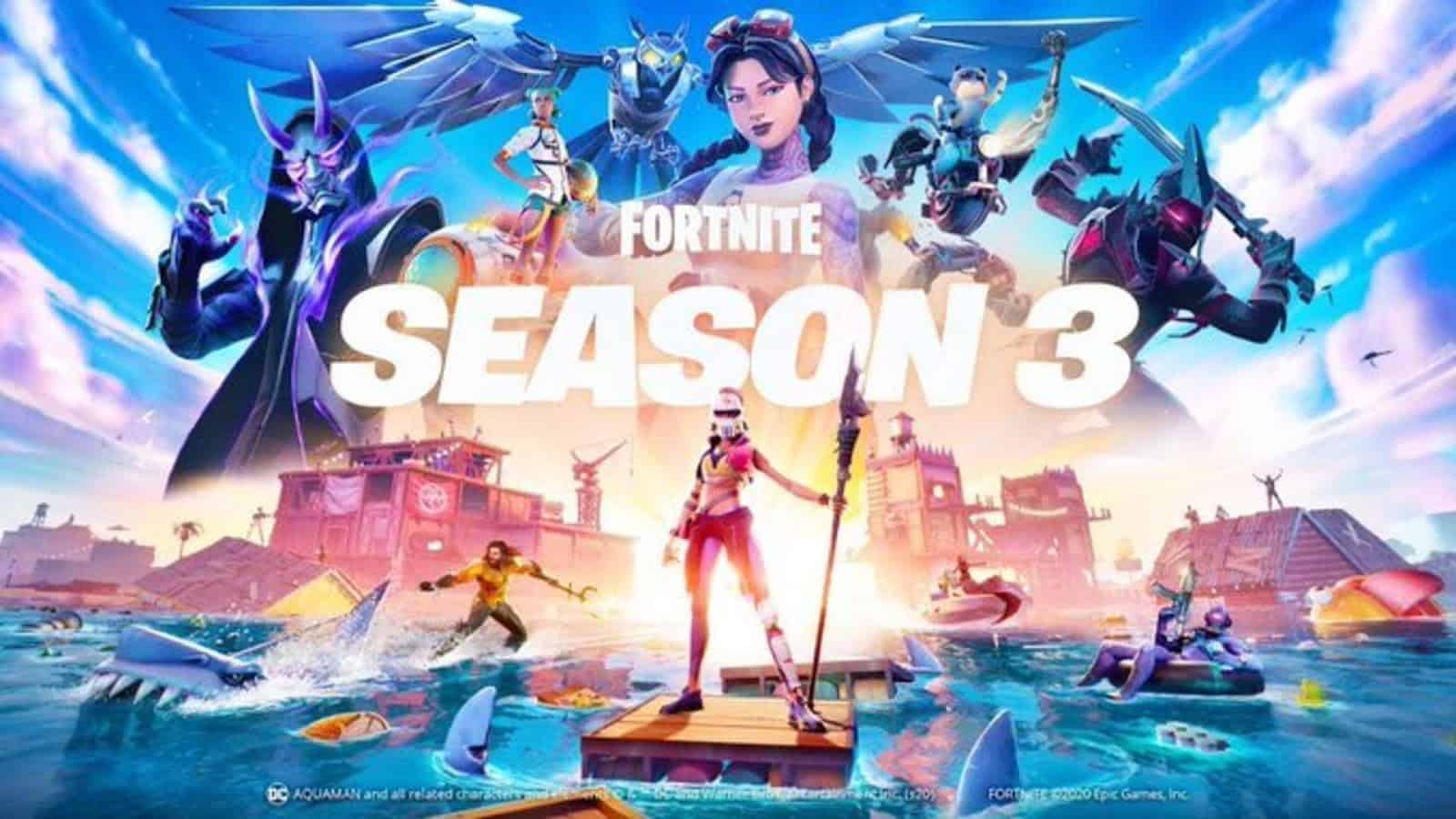 ESTNN breaks down all of the new content in Fortnite’s latest season.

Fortnite Chapter 2 - Season 3 is finally here after nearly a four-month wait. After all the leaks throughout Season 2, we can confirm that most were true. The water storm left after The Device seems to have disappeared, causing many parts of the map to flood. Players are digging deep into the new season with excitement to see what sets it apart from previous seasons.

We’d like to thank all of the Fortnite leakers on Twitter for rapid intel on this new season. They have helped us compile a list of what’s new in Fortnite. Let’s take a look at a full list of the new locations, weapons, items, skins and game mechanics in Chapter 2 Season 3!

Welcome to the waves 🌊

The Island has flooded and there are all new areas to explore, Marauders to take on and... sharks to ride?

Fortnite: Battle Royale’s map has indeed flooded after months of speculation. Leaker FNBRHQ revealed the new layout on Twitter. The new primary points of interest (POIs) include The Fortilla, Rickety Rig, The Authority and Catty Corner.

One of the most significant takeaways is that the map will reveal more locations as the flood subsides. Players can expect consistent map updates and content throughout the season. Their blog post explains this feature.

“As time goes on and water recedes, even more locations will be uncovered. And as the roadways become more open, you’ll discover new ways to get around.”

Fortnite’s Chapter 2 - Season 3 blog post hints heavily that cars and other modes of transportation will also be available in future updates.

All weapons added in v13.00 to BR pic.twitter.com/4Ho9i5FQFO

Fortnite leaker FireMonkey was able to capture all of the brand new weapons in one screenshot on Twitter.

We can say goodbye to all Mythic weapons from Chapter 2 - Season 2. There are many new Mythic items to experiment with in Season 3. All of these items will drop from respective boss characters, similar to last season. The most interesting of the latest items is Ocean’s Chug Jug. This new healing option drops from Ocean’s POI. Players can reuse it after a cool-down period. Jules’ Glider Gun is also unique, considering that it propels players and allows players to deploy their glider.

The list of vaulted weapons includes all variations of the Pump Shotgun. Tactical Shotguns and new Charge Shotguns are the only two options presented in the new season.

We have been able to compile a list of unvaulted items for Chapter 2 - Season 3. This list features old favorites, some of which haven’t been seen in numerous seasons.

As shown in the new season’s trailer, shark riding is now an option for players in-game. According to Chapter 2 - Season 3 blog post:

“Sharks may be item-hungry and dangerous, but they also make for fun transportation. Latch onto one with a fishing rod to ride, steer and jump across the waters.”

Players can take damage and even suffer eliminations at the hands of these sharks. Make sure that you keep your distance while hitching a ride!

Whirlpools are another new feature in Fortnite: Battle Royale’s latest season. When interacting with one, players are propelled out of them and will glide for a short period as a result.

Battle Passes come with the Fortnite territory. They provide something to work for each season. Players can unlock skins, emotes, weapon wraps and much more. Here are all of the new skins that players can unlock in Chapter 2 - Season 3.

For Chapter 2 - Season 3, Jason Mamoa’s Aquaman has taken center stage. However, there is much more to digest with more boss characters around the map. Here are some full character models that players can unlock via the Battle Pass.

One of Fortnite’s rarest skins will also return in the new season for the first time since October of 2017. The Renegade Raider is back and will now feature new styles as well.

The Fortnite Chapter 2 - Season 3 Battle Pass will also allow players to customize an umbrella, similar to the Maya skin feature from last season.

Some of the designs you can put on your custom Umbrella. pic.twitter.com/eIlBTyunLP

the red in the second image is the previous nerf

green is the current one

and this is PC/MAC ONLY https://t.co/efJVXBUKb3

Another Fortnite leaker named Lucas7yoshi dropped a bombshell on controller players with yet another nerf for aim assist. It is specific to Mac and PC based on Lucas7yoshi’s analysis of the game files. Indications thus far are that aim assist has been reduced by 33% much to the delight of keyboard and mouse players.

There is a lot to digest with Fortnite Chapter 2 - Season 3. As of right now, Season 3 is slated to end of August 27. Check back here for more updates considering the infancy of this new experience. More news will surely come out regarding weapons, items and skins.

Until then, dive into Fortnite and see all of the new changes first-hand!