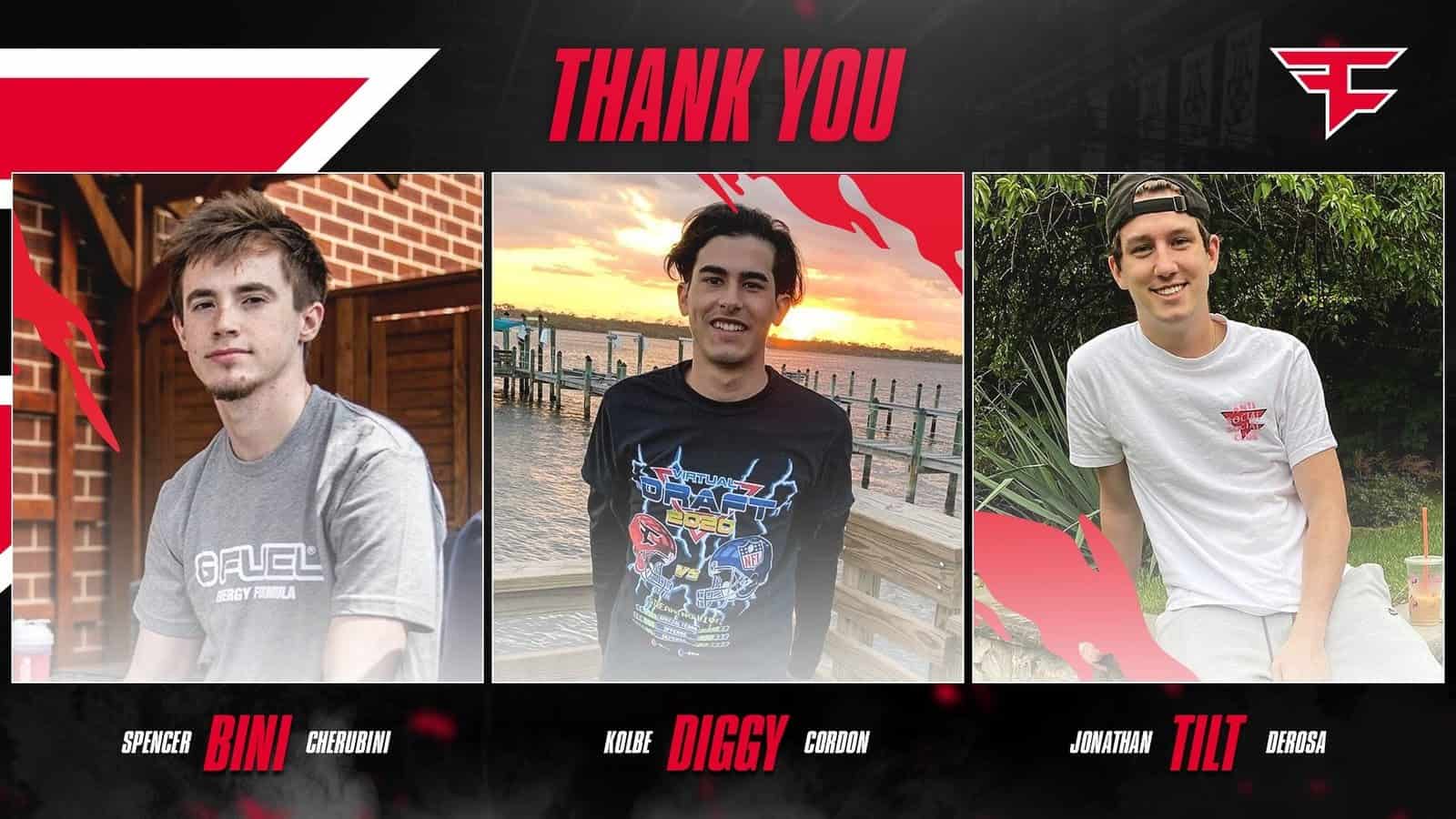 Popular esports organization FaZe Clan has been around for quite some time in the competitive gaming atmosphere. Although well-known for its presence in Call of Duty, FaZe Clan joined competitive Fortnite in 2018 and never looked back. The organization snatched top talents Nate "Nate Hill" Hill, Trevor "Funk" Siegler, Danny "Dubs" Walsh and Noam "Megga" Ackenine in their respective primes. Perhaps FaZe Clan's most significant pick-up - Kyle "Mongraal" Jackson - joined over a year ago. He became arguably the most popular Fortnite player in today's landscape. Despite having some of Fortnite's marquee players, FaZe Clan's roster included many more players that might not be visible to the casual Fortnite viewer.

Three of those players - Kolbe "Diggy" Cordon, Jonathan "Tilt" De Rosa and Spencer "Bini" Cherubini - all joined the FaZe brand in April 2019. After spending a year and a half with the organization, FaZe Clan announced the release of all three players in a tweet earlier today.

#Fortnite: Today we part ways with 3 members of our professional Fortnite roster, @Bini, @FaZeDiggy, and @PerfectTilt.

We're thankful for the time you've each spent competing for FaZe Clan and wish you all nothing but the best in the future! #FaZeUp pic.twitter.com/ZBffiD3z75

"#Fortnite: Today we part ways with 3 members of our professional Fortnite roster, @Bini, @FaZeDiggy, and @PerfectTilt. We're thankful for the time you've each spent competing for FaZe Clan and wish you all nothing but the best in the future!"

Compared to FaZe's remaining members, Diggy, Tilt and Bini struggled to achieve the same levels of success in competitive Fortnite. Diggy managed decent results since joining FaZe. He won a Solo Cash Cup tournament back in Chapter 2 - Season 1. Diggy and duo partner Marzz_OW also took first on day one of the Winter Royale 2019. Bini and Tilt did qualify for FNCS Chapter 2 - Season 1 Grand Finals but could not maintain consistency like Dubs, Megga and Mongraal have over time.

At the time of publishing this article, Diggy is the only player of the three to release a statement regarding FaZe Clan's decision. He posted a Twitlonger, addressing his free-agency.

"First of all, I would like to thank FaZeClan for the opportunity they provided me with. Achieving a spot on their professional roster is something I will never forget, they have my gratitude for believing in me as a player and a person. I will continue my career under the Alias (DiggyKC)," wrote Diggy in a Twitlonger.

"As for my future, I will proceed to compete in Fortnite as I transition into entertainment and content creation. Over the past few years I have fully dedicated myself into just gaming. Moving forward I will diversify my many talents to provide my supporters with a wide variety of content to keep things exciting and fresh as well as maintaining a balance in my life outside the gaming world."

Shortly after releasing the statement, Diggy stated on his stream that he would continue to compete in Fortnite hopefully until the next World Cup event before transitioning fully to a content creator. Bini and Tilt have yet to acknowledge their release from FaZe Clan.

What's Next for FaZe Clan?

I've loved being on @e11gaming, but my contract is coming to an end after FNCS. They're allowing me to explore my options. Open to offers.

FaZe Clan now has more room on its sizable roster. There is no shortage of free agents in competitive Fortnite across every competitive region. FNCS Chapter 2 - Season 3 Champion Tai "TaySon" Starčič announced that he would be leaving E11 Gaming at the end of this season's premiere Fortnite competition. Perhaps FaZe will pick up the Slovenian to expand its European roster, which currently includes Martoz and TaySon's trio teammate Mongraal. NA East pro player Scoped is also a possibility, considering his following on Twitch and social media. There's no telling what's next for FaZe Clan after creating room on its roster.