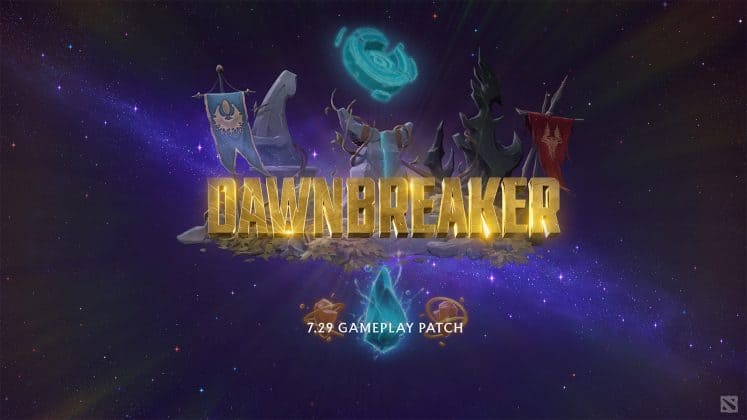 We bring you a detailed break down all the info from Dota 2's latest major update.

Dota 2 received a major update with the release of Patch 7.29, including the new hero and several map changes. The 7.29 update, also known as the Dawnbreaker update, introduces various changes to the game. Including a new durable hero — Dawnbreaker, plus map modifications, and of course buffs and nerfs to items and heroes.

Dawnbreaker is a melee, carry and durable hero with an amazing ultimate ability that allows her to teleport globally. All the other abilities include damage dealing properties while one of them is also able to stun her enemies.

For more info on Dawnbreaker, check out our first impressions here.

Most of the area in the jungle and around towers has changed as it aims to create more juke paths while decreasing as many open spaces as possible. This can be a huge positional advantage to ranged heroes who prefer to take cover of the trees. The positions of neutral camps have also been changed to accommodate fast farming and easy stacking.

There's also been some big changes to runes which we'll take a closer look at here.

A major general update includes a new rune known as Water Power Rune that spawn only at minute 2 and 4 and the Power Rune locations. It can fill bottles and restore 100 heath and 80 mana.

4 Bounty Runes spawn at the same place at the start of the game but later on they stop spawning at the river and the time of spawn has also been changed to every 3 minutes.

As always there's been adjustment to items across the board. ESTNN take a look at the top 10 item updates from patch 7.29.

This item and all it’s upgrades have been completely removed from the game.

Stacking tangos has been disabled and any shared tango will expire after a duration of 40 seconds. This will force mid heroes to rely more on their own healing items.

Will no longer allow a hero to blink towards his target. This is a major setback to all the melee heroes who required an ability to close the gap. This change will now keep ranged heroes a little safer than before.

Increased the mana regen amplification from +24% to +50% which will be a tremendous boost to heroes like Storm Spirit, Puck and Skywrath Mage who heavily relied on mana regen.

Helm of the Dominator 2

This item will now be known as Helm of the Overlord with an ability to dominate up to two units.

A massive change to this item is that it will no longer provide true strike. This change will hurt comeback situations of a desperate team that used to rely on Divine Rapier as their last hope to provide heavy damage with true strike while eliminating the need of a Monkey King Bar. With this change, the hero will have to buy Monkey King Bar if the enemy has evasion items or abilities.

Instead of a full random teleportation, Flicker will now teleport the hero in forward random direction. This will definitely increase a hero’s escape chance.

The neutral item that used to allow a hero to be invisible for 6 seconds while providing extra magic resistance will now not interrupt any of its own hero’s channeling abilities. This is great for heroes like Crystal Maiden and Witch Doctor who wouldn’t need to rely on Glimmer Cape for extra protection while channeling their abilities.

This neutral item’s cooldown has been reduced from 15 seconds to 8 seconds which is a major change as it can now disable ally or enemy hero more frequently. It causes the target to become untargetable while removing all of his abilities to attack or defend as it silences, mutes and disarms the target for 3 seconds. This item can be exceptional against heroes such as Bristleback and Timbersaw as they are such enemy heroes that a team wants to avoid focusing on during team fights.

Now provides +150 Health. This is not a big change but a helpful change to the position 5 supports who can barely buy a couple of items and require mobility with some durability. In the previous patch it used to provide 2.5 HP regen which turned useless after the mid game.

There was a slew of nerfs and buffs in this balance patch. We take you through the top 8 Hero changes.

Among many small changes on this hero, one is a massive change. Buying an Aghanim’s Scepter will now provide two charges of Dark Rift. This ability can completely turn the game around as Underlord can now Dark Rift his entire team back to the fountain, heal them and re-engage the team fight easily by relocating anywhere on the map.

Shard upgrade rework on this hero now gives him the ability to gain +5 intelligence and +1 armor for 35 seconds duration every time he casts an ability. If the hero has Octarine Core, he can cast 25 spells in 35 seconds approximately which would provide a total of 125 intelligence and 25 armor. With such a high amount of intelligence, Skywrath can deal 500+ magic damage using his ability Arcane Bolt after Ancient Seal.

Hoodwink has been granted Aghanim’s Scepter and Shard bonus. Scepter will now provide a new ability known as Hunter’s Boomerang that acts as a debuff of movespeed slow, extra spell damage and reduces status resistance. Shard will also provide a new ability known as Decoy that sends a decoy illusion and upon receiving a hit, coverts into a tree and causes Bushwhack to disable nearby enemies.

Chaos Knight has received a huge upgrade in his level 15 talent as it now provides +35% Cleave instead of 14% Cooldown Reduction. CK was already a strong 1v1 hero but with this change he will even be able to fight illusion producing heroes such Phantom Lancer and Terrorblade.

Aghanim’s Shard now allows Crystal Maiden to move, cast, and attack while she is channeling Freezing Field. This will be a huge asset as Crystal Maiden can now disable the enemy for a longer period of time. All while dashing out an incredible amount of damage using her ultimate.

Legion Commander has received a few nerfs as the Scepter now doesn’t grand spell immunity and immunity from non-duel participants is also reduced from 100% to 50%. This means that Legion Commander will now have to be much stronger than before to win the duels.

Jakiro has received a few changes. These will help him disable a hero for a while longer and deal pure damage that pierces spell immunity much earlier in the game. The helpful disable is his ability Liquid Frost that now grants a 0.4 seconds stun. Plus a purchase of scepter now grants pure damage instead of waiting for level 25. Players can now aim to buy Aghanim’s Scepter as early as possible to deal a massive amount of damage in the team fights.

In an unexpected change, Broodmother’s abilities have been swapped. Spawn Spiderlings is now an ultimate and Insatiable Hunger is now a basic ability. This can be seen as a buff or a nerf depending on the lane. Now Broodmother won’t be able to create Spiderlings until she reaches level 6. But it will now be able to fight better during the early period of the game. The swap in abilities will even enable Broodmother to perform better at offlane or safe lane.

With Season 2 of the DPC set to start next week, patch 7.29 is surely going to shake up the pro meta. Stay tuned to ESTNN as we bring you all the action and fresh analysis from each region!