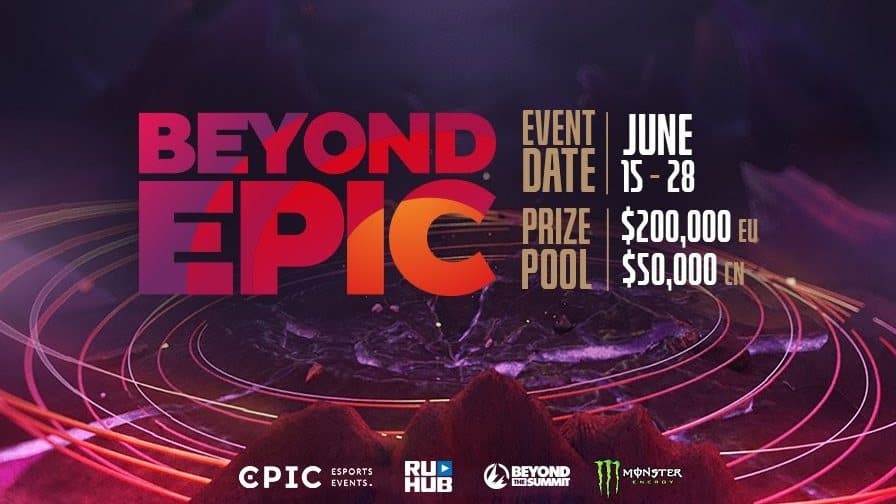 What you need to know about EPICENTER's upcoming tournament.

We are just one day away from the start of the latest online tournament. This one is called Beyond Epic, and its brought to you by RuHub, Epic Esports Events and Beyond the Summit.

Similar to other online events, this one will be divided into two divisions ⁠— Europe/CIS and China.  The total prize pool for this tournament is the jaw-dropping $250K USD, which is a lot of money, to say the least.

Here is the group breakdown for Beyond Epic Dota 2 tournament!

2 best teams in each group will advance to the upper bracket, 3-4th places will make up the first-round matchups in the lower bracket, and the 5-6th places will be eliminated from the tournament.

After waiting for a week, the group stage in Europe and CIS will begin tomorrow. Twelve of the best teams in the world will be split into two groups. They will have to play against each other in the span of 9 day s. Once that’s over, the top two teams from each group will advance to the Upper Bracket. On the other hand, the 3rd and the 4th placed teams will go to the Lower Bracket. Sadly, the bottom two teams from each of the two groups will have to wave goodbye to the tournament.

Once the group stage is over, the teams will have to battle in the playoffs, which will be held in a double-elimination bracket. Every single match here will be in Bo3, whereas the Grand Final is in Bo5.

Having said that, let’s take a look at the two groups in Europe and CIS.

The teams in Group A are;

At first glance, we have an obvious favorite here, and that’s Team Secret. The European powerhouse has been just flawless in the last couple of months, winning five events in a row.

What’s even more impressive about them is that they’ve done with little to no problems. In fact, they’ve only lost a couple of games in all of those events, which is just a clear sign that Team Secret is the best team in the world.

Apart from them, the second squad that definitely has what it takes to be among the winners here is OG. In fact, OG just played against Team Secret in one of the Grand Finals recently and proved yet again that they have what it takes to be among the best. Nonetheless, they weren’t able to figure a way to win against Secret, which is worth pointing out.

The third team that deserves to be mentioned here is none other than Nigma. TI 7 champions are slowly but steadily starting to build momentum, which makes them really dangerous. Although they might not be on the level of Team Secret, they can definitely compete with OG for that second spot here.

As for the other three teams, it will be really hard for them to survive in this group. As much as we like Natus Vincere and Vikin.gg, they'll need a miracle to leave this group in the Upper Bracket.

Group B will be made up of the following teams;

Although it might not seem that interesting at first, this group is unpredictable. Unlike Group A, here, every single team has the potential to go to the Upper Bracket. Even though there are some favorites, you never know what will happen.

One of the teams that definitely stands out is Alliance. Similar to Team Secret, Nikolay “Nikobaby” Nikolov and his team-mates have been doing pretty good in the last couple of weeks. They’ve secured some good results and showed everyone that they are among the best in Europe right now.

In addition to them, Team Liquid is also another squad that can explode at any given time. The thing about them is that they are unpredictable. Sometimes, they might feel as if they’re not really trying to win. However, once they decide that they want something, they are capable of winning against every team.

Last, but definitely not least, we have Virtus.Pro. The best CIS team will try to redeem itself after a series of bad results that took place a few weeks back. It seems like they’ve finally managed to resolve their issues, so we just have to see whether they have what it takes to fight with the best European teams.

Don’t forget to watch this event live on Beyond the Summit’s Twitch Channel.