Find out how to slay enemies with Counter Helix and Culling Blade while playing Axe in Dota 2.

Millions of players are forming parties with their friends to win more Dota 2 matches in 2023. The events of Battle Pass 2022 has just ended, giving people plenty of time to enjoy casual gaming experiences. People with the Battle Pass 2022 played loads of Diretide games to earn exclusive rewards, such as the Immortal Treasure II 2022 and the Ageless Heirlooms 2022 treasure.

Many people are putting in several hours of their gameplay with their esports teams to engage with competitors online. Axe has been leading a majority of these games as a durable tank hero to help allies win team fights without dying.

This guide will help you learn how to slay enemies with Counter Helix and Culling Blade while attacking opponents with Axe.

Axe - How to Slay Enemies with
Counter Helix and Culling Blade 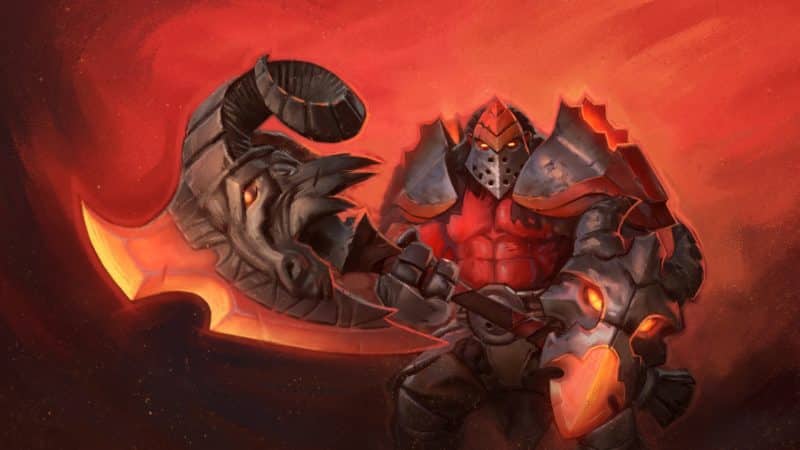 Axe is a melee hero who has been picked countless times over the years for his ability to stand and fight during battles. He has a passive ability, Counter Helix, that can return damage to enemy units who are brave enough to fight Axe in Dota 2.

The Strength hero can deal Pure damage with his ulti, Culling Blade, to mitigate enemy heroes at sight. You can prioritize his skills based on the heroes that you are facing in the enemy team. Abilities like Berserker’s Call and Counter Helix have to be leveled up to obliterate enemy heroes early in the game. You can max out Counter Helix while fighting multiple tank heroes who can crush your allies without the support of the Strength hero.

People can start Dota 2 matches by buying a few consumables to help Axe heal from incoming attacks. You can purchase a couple of Enchanted Mangoes and Healing Salves to restore health and mana to Axe while farming in the lane.

Axe can head to the off lane to farm gold after he spawns into the game. The Strength hero has 700 health at the start of the game, making him a reliable tank hero in Dota 2. People who are new to playing Strength heroes can focus on taking the last hits near the tower to reduce the amount of incoming damage from enemy units.

Take a level of Counter Helix to be able to enter team fights and initiate battles while playing Axe. The melee hero has a 17% chance to deal 60 damage to all enemy units attacking Axe in a radius of 275 using Counter Helix at level one.

The Strength hero can cast Berserker’s Call on enemy heroes to force his opponents to attack Axe in battles. Berserker’s Call can be used to taunt enemies in a radius of 300 for 3.2 seconds and provides 25 bonus armor to Axe. It has a cooldown of 11 seconds and consumes 110 mana to be used.

The melee hero can take out enemies when they are running low on health using Culling Blade. His ulti, Culling Blade, deals up to 450 Pure damage to an enemy unit. It has a cooldown of 70 seconds and requires 150 mana.

The cooldown of Culling Blade is reset after Axe kills an enemy hero with his ulti, providing bonus movement speed and attack speed to Axe and his allies for up to 6 seconds. It also provides a permanent bonus armor of 2 per kill to Axe. You can increase the damage dealt by Culling Blade at level 20 to deal additional damage of 150 with Axe’s ulti.

Culling Blade and Counter Helix provide a good chance to survive battles while fighting enemies with Axe. The Strength hero can use the bonus movement speed to prevent enemy heroes from fleeing battles. You can try to get Double Kills and Triple Kills with Axe in Dota 2 matches to increase your overall kill counts in the game.

Arcane Boots provides 250 mana and 45 movement speed to Axe. The item costs 1300 gold in the game. Axe can nuke enemies with Battle Hunger and Berserker’s Call after purchasing Arcane Boots for the Strength hero. You can use Arcane Boots to restore 175 mana to Axe and all of his allies in a radius of 1200. Arcane Boots has a cooldown of 55 seconds.

Blink Dagger lets Axe teleport up to a distance of 1200 in any direction. Axe can use Blink Dagger to initiate team fights in Dota 2. You can cast Berserker’s Call after blinking into battles to surprise enemy heroes. Blink Dagger has a cooldown of 15 seconds.

Crimson Guard provides 250 health, 12 health regeneration, and 8 armor to Axe. The item can be bought for 3600 gold in the game. Axe gains a 60% chance to block 75 damage from incoming attacks with Crimson Guard.

You can activate Crimson Guard to provide a barrier to allies that has a 100% chance to prevent 75 damage for 12 seconds. Crimson Guard has a cooldown of 35 seconds.

Blade Mail can help Axe return more damage to enemy units in Dota 2. Axe can use Blade Mail to return up to 85% of incoming damage for 5.5 seconds. The item has a cooldown of 25 seconds and consumes 25 mana in the game. Blade Mail provides 28 attack damage and 6 armor to Axe.

Heart of Tarrasque can provide up to 250 health, 45 Strength, and 1.6% of Axe’s max health as regeneration to the Strength hero. Axe can easily withstand attacks from enemy heroes and towers with Heart of Tarrasque in his inventory. Venomancer is a ranged hero who can spew venomous poison to enemy units in a large radius. He has a projectile speed of 900, allowing him to nuke enemy heroes rapidly with his magical spells. The Agility hero can assist Axe in getting more kills with Counter Helix and Culling Blade by weakening enemy heroes in Dota 2.

Allies can cast Venomous Gale to slow the movement speed of enemy heroes by 50%. Venomous Gale deals an initial damage of 125 and an additional damage of 105 every 3 seconds for up to 15 seconds. Venomancer can use Venomous Gale before Axe can use Blink Dagger to increase Axe’s chances of triggering Counter Helix in the match. Venomous Gale has a cooldown of 18 seconds and requires 125 mana per cast.

The ranged hero can place Plague Wards around the map to provide vision to the team. Axe can charge in on enemy heroes who are farming in neutral creep camps and destroy enemies using Culling Blade to gain bonus armor. Plague Wards last for up 40 seconds. Each of these Plague Wards have 450 health and 40 attack damage. Plague Wards have a cooldown of 5 seconds and needs 30 mana.

His ulti, Poison Nova, can be cast by Venomancer to drain enemy heroes of their health. Poison Nova deals up to 3.5% of the max health of enemies for up to 20 seconds. Venomancer’s ulti affects all allied units in a radius of 950. It has a cooldown of 100 seconds and requires 400 mana.

Axe can use Battle Hunger to slow down enemies affected by Poison Nova. You can let the poison lower the health of your opponents before dealing the final hit using Culling Blade in team fights. Venomancer can upgrade Poison Nova using an Aghanim’s Scepter to increase the damage dealt by his ulti. Lich is an Intelligence hero who can use his abilities to decimate enemy heroes. The support hero can cast Frost Blast to decrease the movement speed and attack speed of his opponents. Enemy heroes affected by Frost Blast will take 160 damage and an additional 200 damage. Frost Blast has a cooldown of 7 seconds and consumes 140 mana.

Teammates playing Lich can cast Frost Shield on Axe to reduce incoming damage by 60%. Axe will deal 50 DPS for 8 seconds and slow enemies by 35%. Frost Shield has a cooldown of 15 seconds and requires 130 mana to be used in the game. The Intelligence hero can also use his ulti, Chain Frost, to assist Axe in killing enemies with Culling Blade.