The new season is almost here with a lot of new changes.

It’s always exciting when a new Ranked Season starts. There are new changes, the game is fresh and it is time to start a new climb. Season 2023 is similar in these ways where there are once again jungle changes coming, more new items and champion adjustments. But it is also different than the seasons before as players will be met with a change in the Ranked System, the first in many years.

With the LoL Season 2023 coming out on live servers on January 10 with patch 13.1, Riot recently invited members from the press to attend a roundtable event where they talked about the changes and answered some questions. Jeremy “Brightmoon” Lee, Executive Producer of League of Legends, and Chris “Auberaun” Roberts, Game Loop Product Lead, represented Riot during the event.

We saw some of these changes implemented during the preseason, mainly the gameplay ones. Players had a chance to test out the jungle pets, new ping wheels and the improvements in the champion selection lobby. The latter lobby changes were allowing players to swap pick positions, giving rune and summoner spell recommendations and the removal of summoner names to solve the dodging problem. These quality-of-life changes were appreciated by the community and Riot is planning more for Season 2023. One of these planned changes is a long-time request by players, the ability to change languages in the client.

Another community request throughout 2022 was more events. Or more specifically events with game modes such as Nexus Blitz and Twisted Treeline. Lee said that they heard the player feedback about the events and game modes, and they already started to put together a new team to handle these subjects. He also hinted at a Void event that might come in 2023.

For those keeping up, Riot announced their plans to split up their season into two parts back in early December. Roberts said other Riot games like Valorant and Wild Rift, along with many others in the industry, were a big inspiration for the change. Many online games usually separate the year into multiple seasons or parts using different events. But for LoL, the two Splits won’t be for any events but to have a rank reset.

Currently, Riot resets players' ranks between seasons and gives out rewards for their placements for that finishing year. Every player gets some reward, but only those who managed to end their ranked climb as Gold or above can earn the Ranked skins. For example, if you finished Gold+ last year, you got the Victorious Sejuani skin. 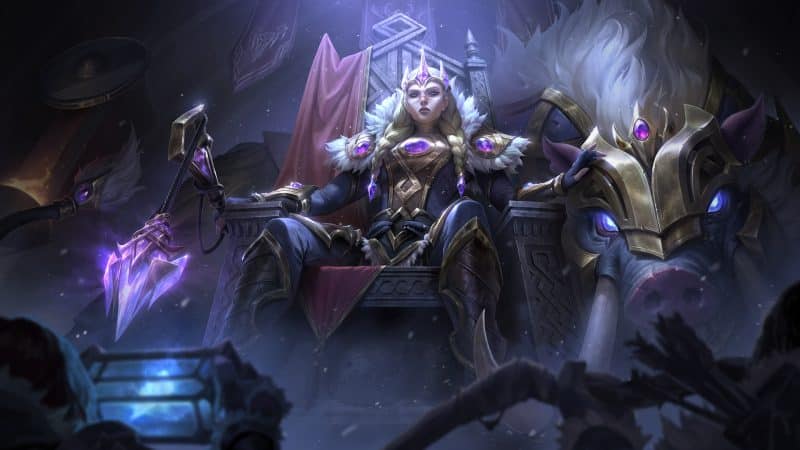 But in Season 2023, Split 1 will end sometime during the Summer, with Split 2 starting very close afterward. Thankfully, the rank reset between splits won’t be as severe as the one we have currently. There is a chance the team decides to borrow the TFT system, where players are demoted one rank between mid-set updates, e.g., from Platinum to Gold. Each split will also have its own rewards, and yes, that means two Victorious skins in a year.

These rewards won’t require any pass purchase, and for the first time in LoL history, will be available to players under Gold. The aim of this change is to award the people who grinded the game for hours, even if they couldn’t achieve a higher rank, said Roberts. He also added that the Iron and Bronze skins would have a different chroma, and they would be harder to earn as they come without a rank requirement.

It wouldn’t have been a new League of Legends season without some kind of jungle changes. This year’s list was mainly focused on lowering the entry into the role while removing some of the very specific interactions such as double camping and extreme leashing. Leashing Range Indicators and jungle clear path recommendations were added to the game.

Players used to be able to get this information through external sources like streams, guides or Youtube videos so not every player had the same base knowledge when it came to jungle clear optimization. Pathing recommendations will be based on the data from the games of higher elo jungle players.

Riot also made changes to the smite. The new jungle starting item is now 450 gold and will give junglers access to jungle pets that help them clear their camps. These pets will evolve as the junglers kill their camps and eventually will give them Avatar buffs, empowering their abilities.

According to Roberts, these changes led to an increase in the number of players queueing jungle during the preseason. Of course, these players can just be testing the changes, but the hope is to get more players playing the role and reduce the autofilled junglers during the Ranked Season itself.

New items and communication options added to the game

While there weren’t as many new items added as in the previous years, Season 2023 still had many new, and returning, items. Fan favorites Rod of Ages and Iceborn Gauntlet are back along with the dreaded Spear of Shojin. Neither of these was especially popular or strong during the Preseason, but with the RoA buffs on 13.1, it is important to keep an eye out.

The shining stars were the new tank items. Both Jak’Sho, the Protean and Heartsteel dominated the meta at some stretches, especially on bruisers in combination with Blade of the Ruined King or the updated Ravenous Hyrda. The Jak’Sho/Sunfire Aegis duo was a good tank item combo, even though the latter was downgraded to Legendary.

The other big system update was to the communications, mainly the pings. If you played during preseason you probably noticed the new massive pings and the bigger ping wheel. Along with more options on the wheel, Riot is also trying objective voting. While any change to improve communication in a team game is a good thing, the community is not especially happy with Riot’s direction, as many players would rather have voice comms added to the game.

All of these LoL Season 2023 changes will be on the live servers in a couple of days when patch 13.1 is dropped. The patch is scheduled for this Tuesday, January 10.

For more League of Legends news and game updates, follow us on ESTNN.